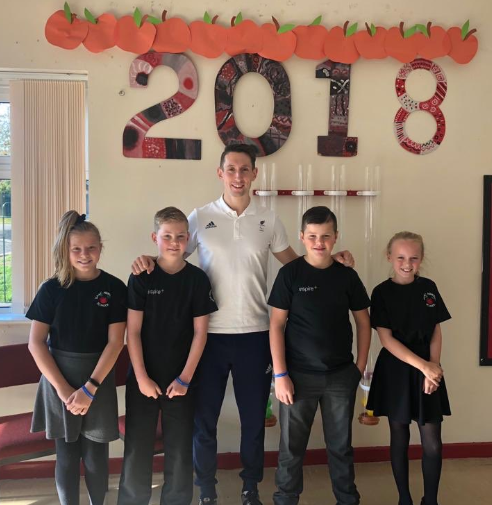 Isaac Newton Primary School in Grantham welcomed sporting superstar Jonathan Broom-Edwards to their assembly last week. He delivered an inspiring and engaging presentation for pupils across the whole school.

Jonathan won a silver medal at the 2016 Paralympics in Rio and is a three-time World Championship silver medallist. He spoke about his key values of determination, respect, courage and hard work before inviting pupils to show the same principles in the classroom and at home.

Pupils were in awe of the 30-year old when he showed a video of his performances in Rio after explaining his disability. Jonathan has a condition called Talipes Equinovarus and clubbed foot, a deformity mostly affecting his left foot. He also has muscular imbalances throughout his body which can cause instabilities.

Isaac Newton Primary School are part of the Inspire Plus Sports Ambassadors programme where the sports charity train and support young sporting leaders in numerous schools across the county. The four Bronze Sports Ambassadors from Isaac Newton (pictured) were on hand to introduce Jonathan, who is one of Inspire’s famous faces that regularly attend schools to motivate and engage the next generation.

Jonathan commented: “Children are the future. If we can install some good values and behaviours from a young age it will help everyone. There’s so much talent evident when I go to these schools and it’s great to inspire them to fulfil their potential.”

We were incredibly fortunate to have Jonathan visit, to talk to the children about persevering and believing in yourself. The children were very excited to listen to Jonathan and have already taken steps to improve their lifestyles.”