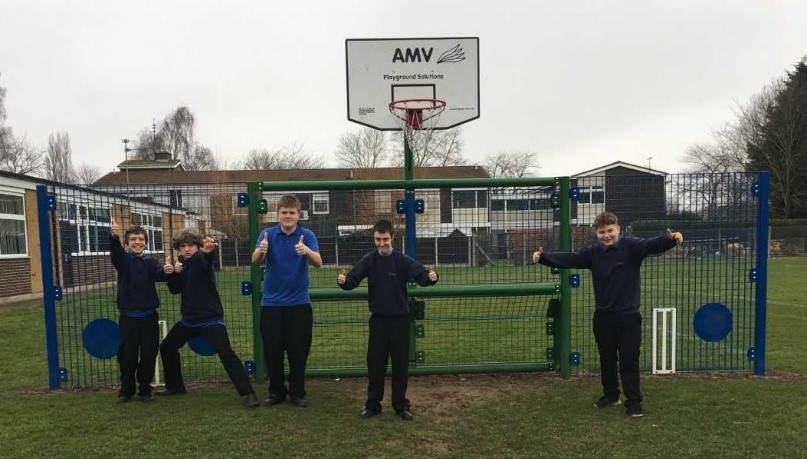 Councillors across South Holland District Council have clubbed together to support a project at The Priory Special School in Spalding.

Sally Slade, District Councillor for Pinchbeck and Surfleet Ward said: “I was keen to support the project as I know how important it is for the children to have structured and safe areas to play and relax in outside.”

Over 12 months ago The Priory School embarked on a project to improve their sport facilities for pupils and to make them safer.

The Priory School effectively meets the needs of pupils aged 11 to 16, all of whom have moderate learning difficulties and many of whom have Autistic Spectrum Disorder and Social Communication Difficulties.

Their playground occupies 130 children with special needs and only has some old markings and two free standing netball hoops.

A year ago they received a National Lottery Award and were able to install two large MUGA ends which include football goals, basketball hoops and cricket stumps.

The MUGA’s are a great addition to the playground facilities however, they are positioned on grass and during bad weather, cannot be used. To complete their project they now need to install court surfacing with sport markings for football and basketball, along with secure fencing to enclose the sport court.

By containing the sport court, pupils will have an uninterrupted game of football, netball or basketball without impacting upon other children. Because of The Priory School pupil’s additional needs, they don’t always understand a playground situation and if incidents occur they can be quite catastrophic for them.  The main aim is to include everyone in practical and fun outdoor activities to help them not only burn off excess energy, but also return to the classroom more engaged and ready to learn.

Barrie Taylor, Head of Site at The Priory School said, “We were thrilled to receive the lottery money last year and we are now fully focused on completing this project so that the pupils can enjoy a safer, fully enclosed sport court. Other organisations including Action for Children and Spalding United Youth Teams, will also benefit from this new facility once completed.

“We are very thankful to the councillors across South Holland District Council for getting us off the mark with their kind donations. We are now at £4,000 of a £31,000 target.”