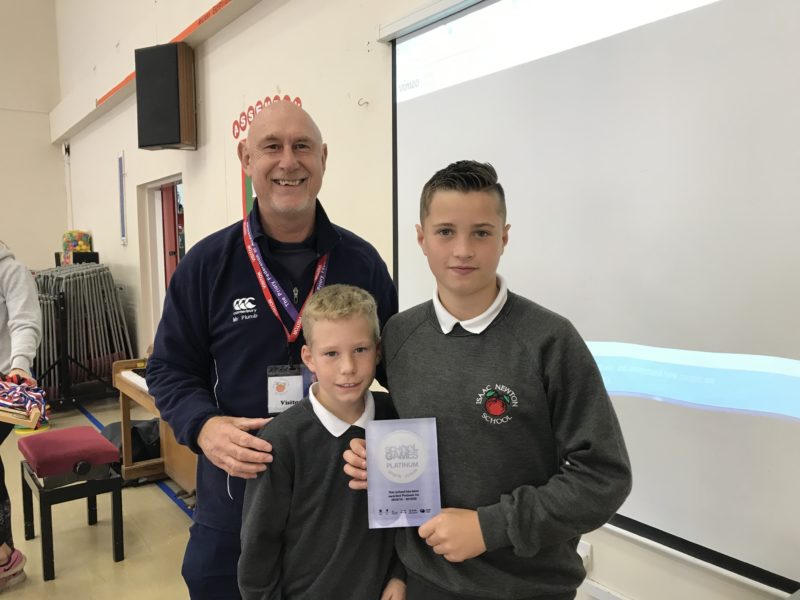 Isaac Newton Primary School have become one of the first settings in Lincolnshire to achieve the School Games Platinum Mark and they were presented with the award during a special assembly with Lincolnshire South West School Games Organiser, Terry Plumb.

The School Games Mark is a Government led award scheme launched in 2012, facilitated by the Youth Sport Trust, to reward schools for their commitment to the development of competition across their school and into the community, and Isaac Newton are delighted to have been recognised for their success after more than five years of hard work.

Alongside ensuring that every pupil has access to at least two hours of PE per week, with other lessons made more active by tracking progress on an activity heat map, over 70% of Key Stage 2 pupils have partaken in extra-curricular clubs during the last academic year.

Before a medal presentation for recent tri-golf, rugby and cross-country activities, Terry explained to the whole school what made their Platinum application so successful.

“Over the last few years, you have done really well at sport and physical activity. Because of your hard work and getting the Gold award, you have been able to achieve Platinum.

There are only two out of 46 schools in South-West Lincolnshire that have gained Platinum. You should be very proud.

You’ve entered lots of competitions and festivals and have lots of extra-curricular activities and clubs. This is a very good school that takes sport seriously and knows the benefits of it.

Your Sports Ambassadors are a great help to staff and you have active lessons, not just in PE. It’s a big deal at the moment with the lack of activity in children. You also have some great club links.”