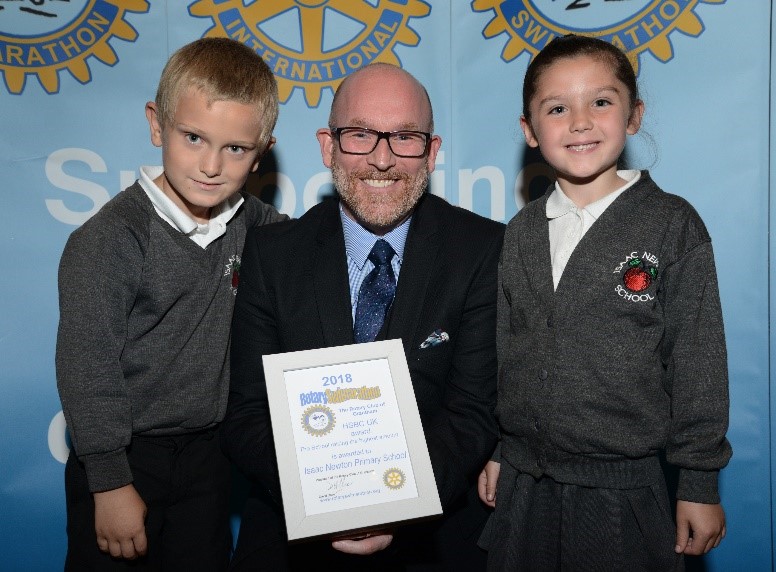 Pupils and staff from Isaac Newton Primary School were acknowledged at this year’s Rotary Swimarathon presentation evening, for raising the most money by an individual school.

The event took place on Tuesday 19th June at St Wulfram’s Church in front of a packed audience.

The Swimarathon took place on Friday 2nd to Sunday 4th February with Isaac Newton School entering 8 teams in to the 29th Annual Rotary Swimarathon.  The swimmers clocked up as many lengths as they could in return for sponsorship and the school raised over £1,500 for the Swimarathon Charity!

Pupils, Devan and Lewis, were representing Isaac Newton School on the night, and they were called up to collect the award on behalf of their school. Also present was Assistant Head Sara Pask:

“Every year we enter as many teams as possible for the Swimarathon.  We are delighted and proud of the children for taking part and raising as much money as possible.”

Devan and Lewis both added, “We are very proud that we raised so much money.”

Across the weekend a total of thousands of lengths were swam by the participants, and over £36,000 was pledged to the Rotary Club of Grantham’s Swimarathon.

Well done to all for taking part!

Next year’s Swimarathon will mark the 30th Anniversary and is already booked for 1st to 3rd February 2019.