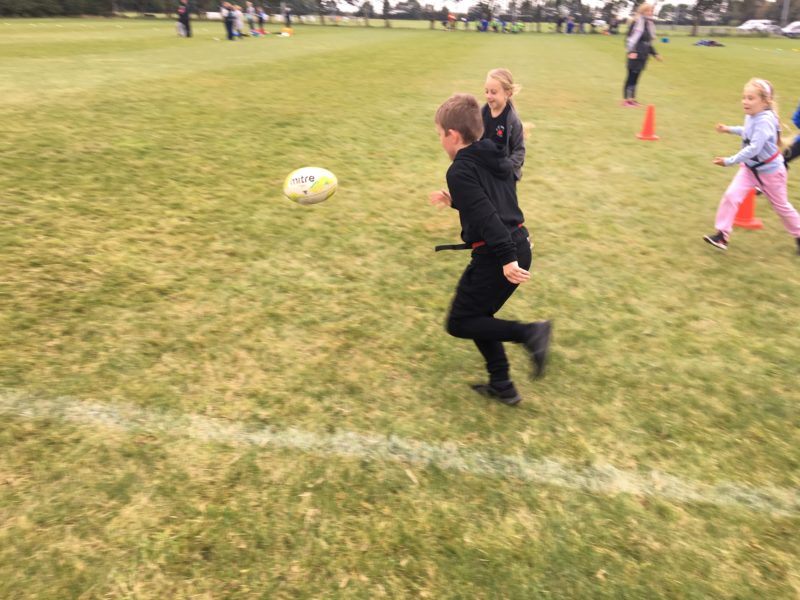 “I’ve never been to a tournament before but I’m so excited.”

“I’ve done a tennis competition but can’t wait for rugby.”

“This is going to be great fun…”

…”it really was great fun!”

Eight Year 3 pupils from Isaac Newton Primary School had the opportunity to experience a festival of rugby, meeting up with more than a dozen teams representing schools from the Grantham area, as they enjoyed a series of skills and games at Kesteven Rugby Club.

The teams undertook challenges designed to improve their passing, catching, running with the ball, agility, quickness and kicking, all key components of the sport that is currently entwined in an exciting World Cup at national level.

Isaac Newton started the afternoon with a game of Kick Rounders, testing their abilities as the next Owen Farrell by taking it in turns to catch a ball and then kick it as far as they could before sprinting around the course.

Speed and agility were key techniques in games of Stuck in the Mud and Relay Races as the seven and eight year olds shot around the area like England’s Jonny May on the wing.

In between the skills sessions, that also included games of ‘Over and Under’, pupils took part in a series of mini matches with different rules like making five passes before you can score, or having to stand still and pass. Some of the gameplay was technically astute, not too dissimilar to the New Zealand side expected to win the World Cup.

“I watch rugby on TV. Now people are watching me.”

You can watch a video of the afternoon here.

Another fantastic sporting experience provided by Isaac Newton Primary School who recently became just one of two Grantham schools to be rewarded with a School Games Platinum Award.